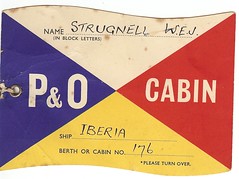 This first section of the Parakou Gallery relates to moving people rather than cargoes.

The plight of South China’s distressed emigrants who endured long sea passages, squashed with their few belongings on crowded open decks or in steerage berths, is graphically illustrated in this gallery. In contrast, there are exhibits describing the great age of luxury passenger liners, complete with luxurious staterooms and designer luggage.

Ferries are a vital mode of transport in Hong Kong and their history is described from the days of the early ferry crossings to Macau or Guangzhou, to today`s flight across the sea surface in jet powered ‘surface effect’ vessels.  It is worth pondering over the amazing statistic that in Hong Kong, there is one passenger travelling per second, every second of the day.

The gallery is sponsored by the Parakou Group in honour of the Group`s founder, C.C. Liu.